As the person who has built his own powerful desktop PC, I was never sold on the idea of a tab but once I decided I needed it, in order to solve Pastest and read PDF books on a bigger screen, the 2018 iPad (6th generation) was an obvious choice. The iPad is simply the best tab available in the market and the Android tab experience comes nowhere closer. Among the current models, the 2018 iPad (6th gen) has the right balance between pricing and features. I bought the iPad (32 GB, WiFi) and the Apple Pencil from the iStore on Elgin Road; I did get a ₹1,000 discount on the iPad but I left the store without any other accessory as they had nothing good to offer. 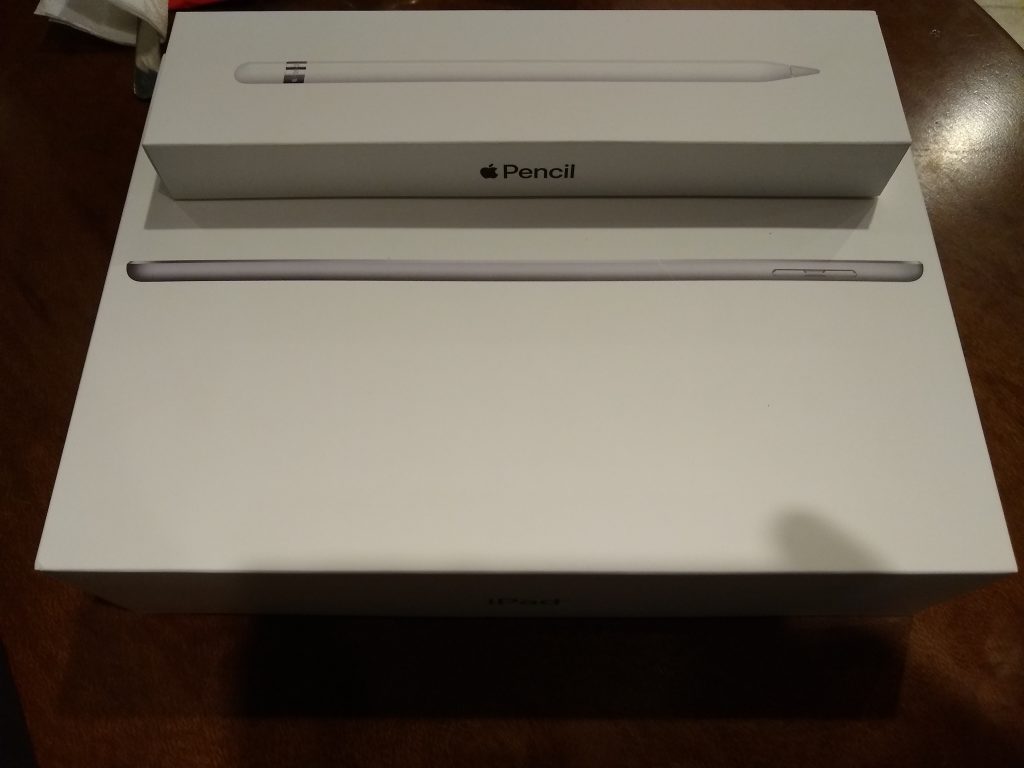 The iPad 6th gen boasts of a stunning 9.7 inch display and slim design. Weighing just a pound, the 2018 iPad is a delight to hold. It is slightly thicker than the more polished iPad Pro though. In fact, design wise this slate hasn’t seen much change from the days of the iPad Air. The large bezels still exist which, being black on my space grey iPad, offer an immersive experience though. I was relieved to find the headphone jack however, which has been phased out from all other iOS devices. 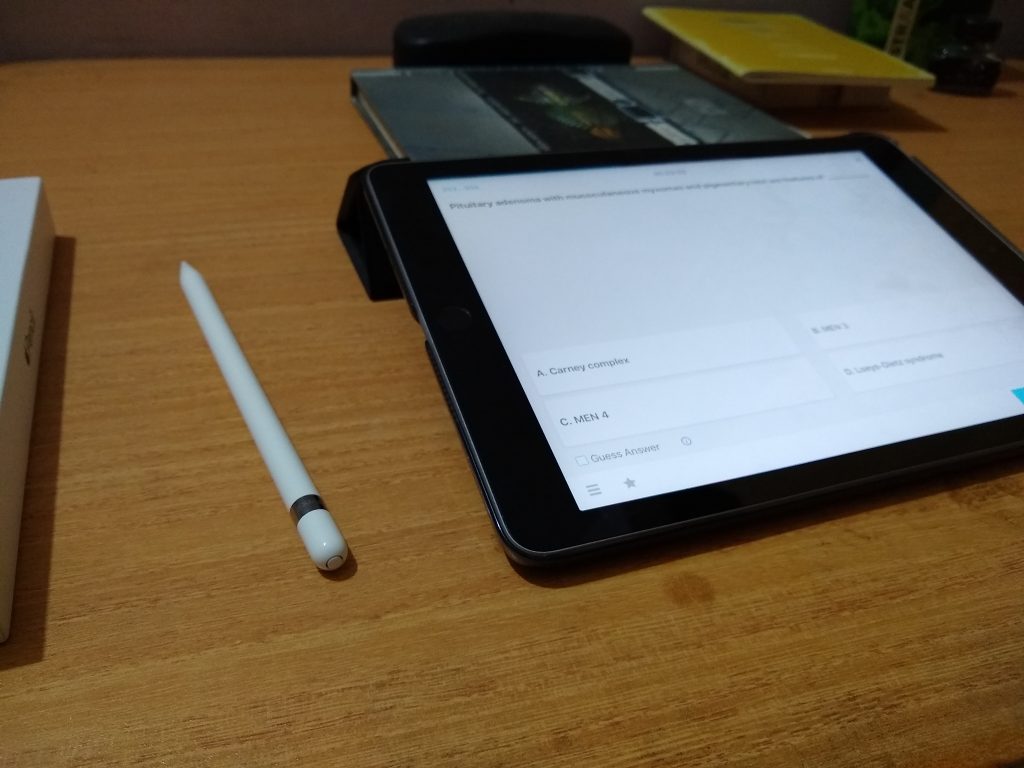 Sitting on my desk: The iPad with the Pencil[/caption]

The state-of-the-art multitasking features on the iOS allow the iPad to be used almost like a computer. Check the photo below to find out how I can scribble notes in the Apple Notes app while solving MCQs, keeping two apps laid out side by side - a feature which Apple calls Split View. This is just a peek into the array of multitasking features the iPad is armed with. With the right iOS gesture, you can invoke Split View, Slide Over, multi-touch Drag and Drop, a customizable Dock that is accessible from any screen and holds upto 13 user-defined apps and 2 recently used apps, App Switcher, App Spaces and Video Picture in Picture. Pair the iPad with a Bluetooth keyboard to enhance the capability of the device further. 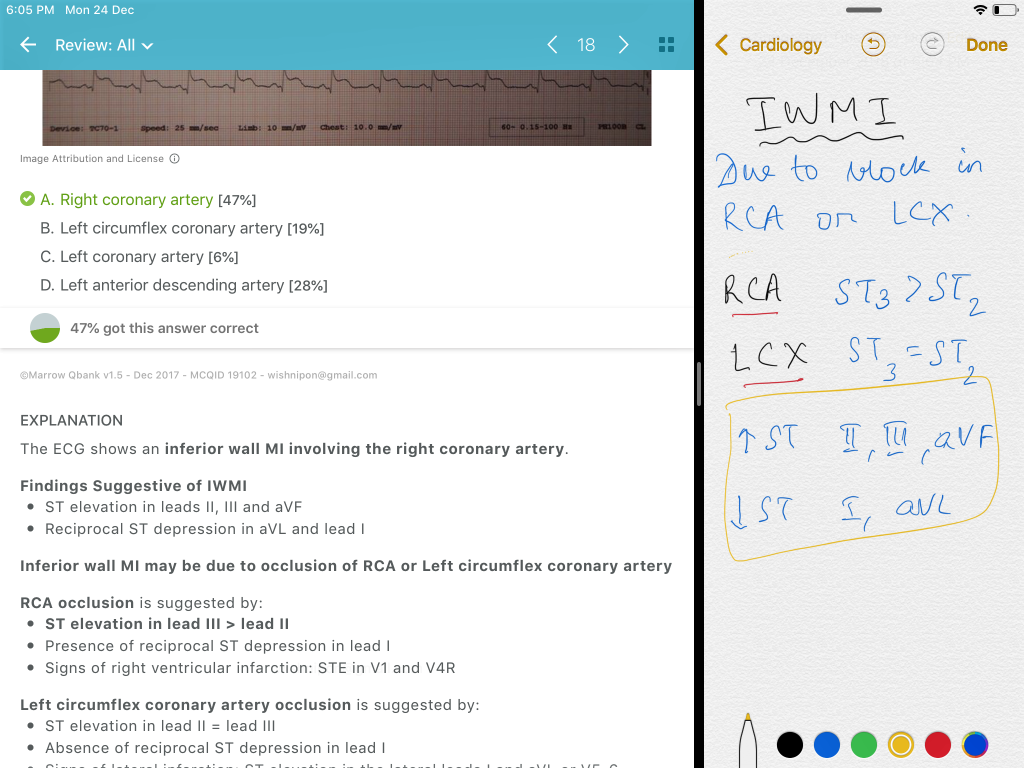 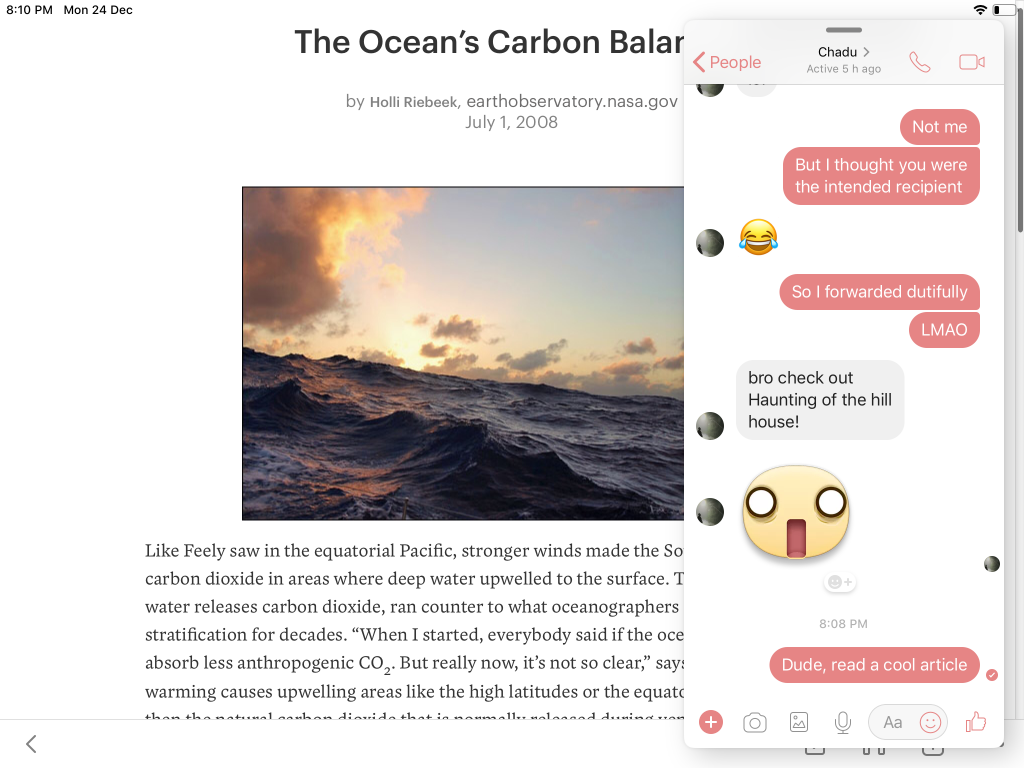 I can have an app Slide Over and float on top of the main fullscreen app.[/caption] [caption id=“attachment_1561” align=“aligncenter” width=“1024”] 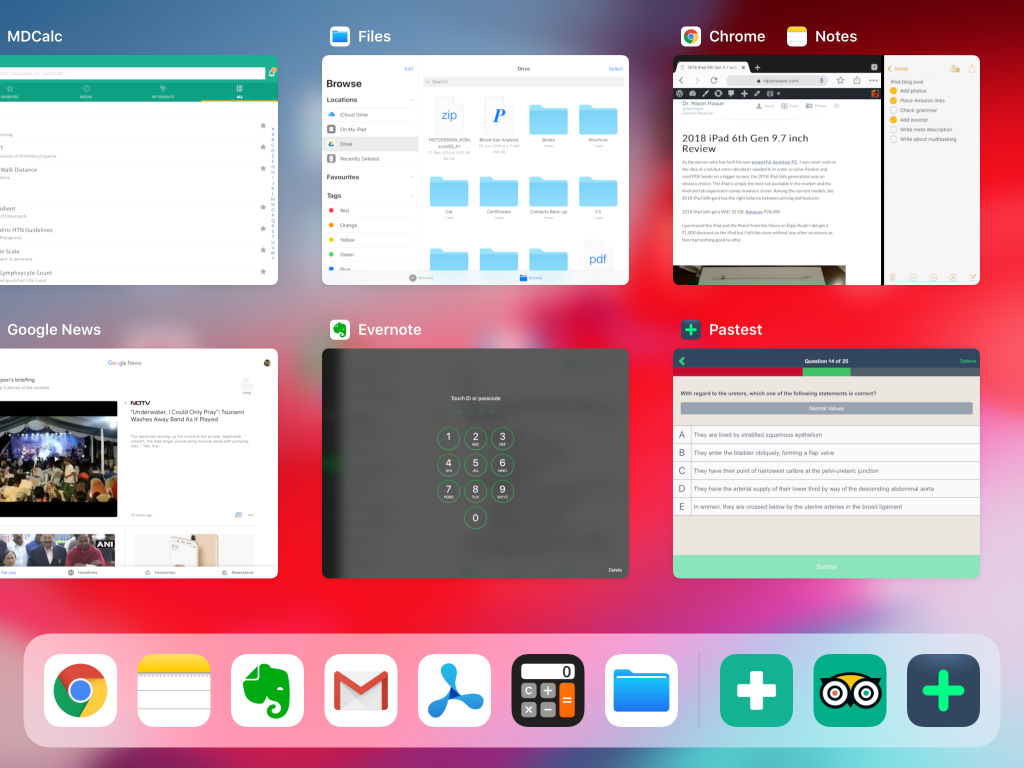 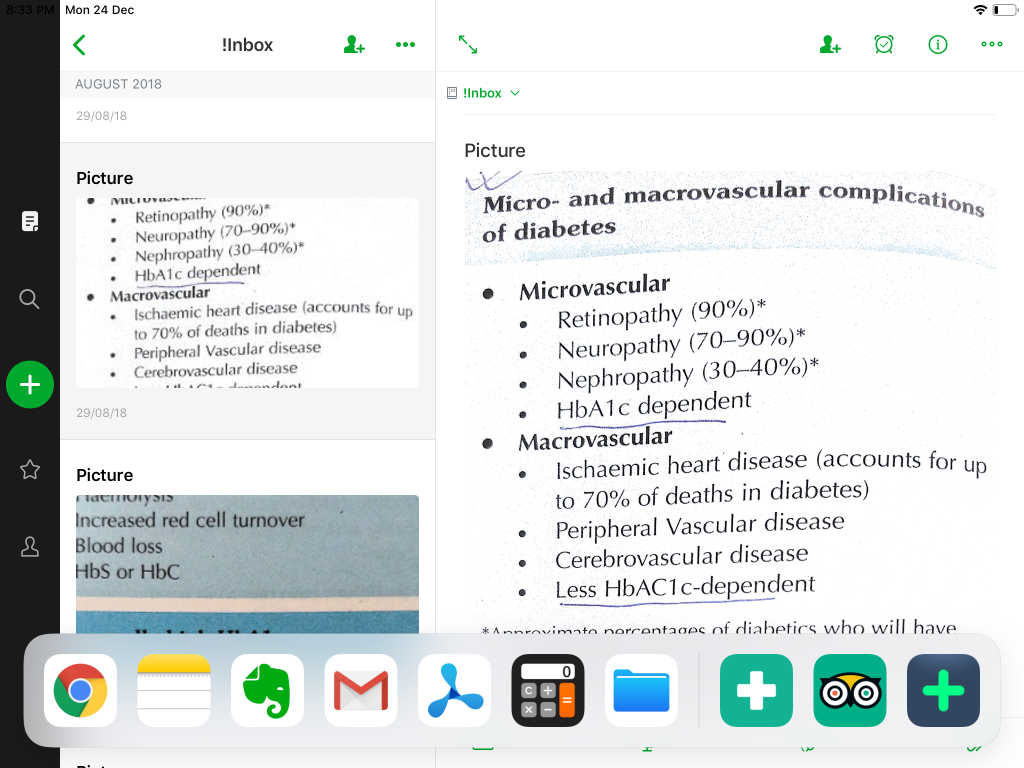 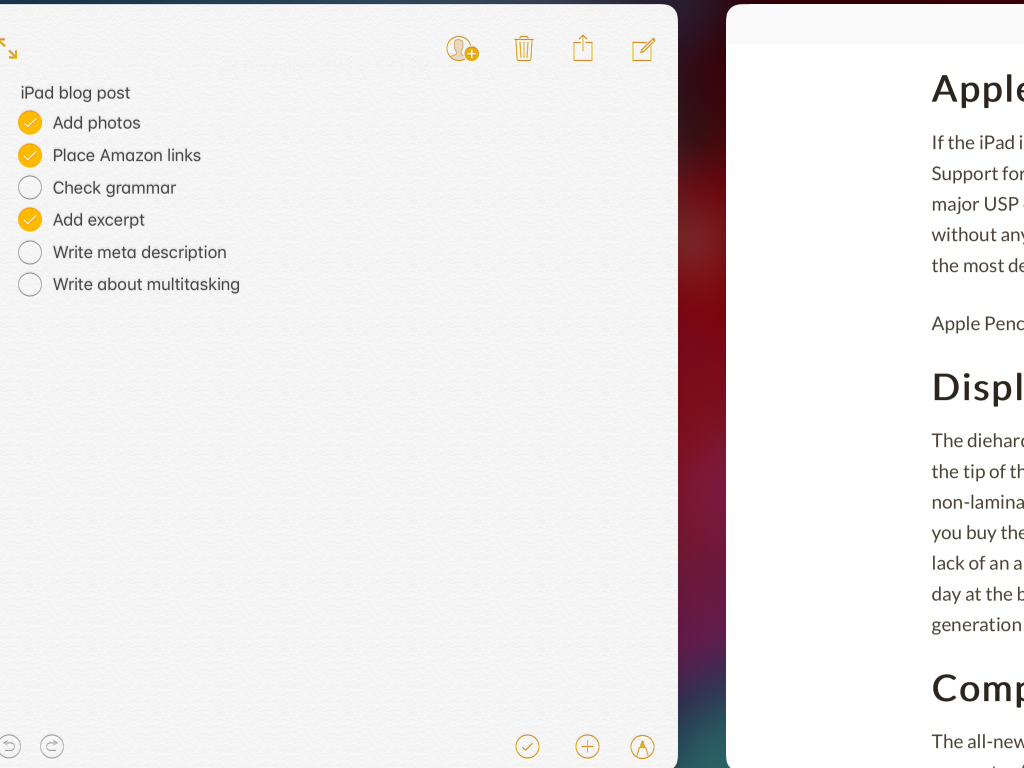 iOS gestures: I can actually drag the screen with four fingers to the left or right to quickly switch between the open apps.[/caption]

While the iPad 2018 has retained the same chassis from yesteryear, it has seen a significant upgrade in the horsepower. Using the iPad feels very snappy, thanks to the impressive A10 Fusion CPU. In my experience, it ran fluidly and handled heavy-duty editing apps with ease. The fast enough iPad has enough battery juice to keep you occupied during a ten hour long flight.

If the iPad is a glorified piece of paper, it sure needs a fancy pencil to go with. Support for the Apple Pencil, so far limited to the iPad Pro models, has been a major USP of the iPad 6th gen. The Pencil offers smooth writing on the iPad without any lag. Full support for tilt and pressure sensitivity makes the pencil the most desirable accessory for the iPad.

The diehard graphic designer will complain that there is a slight gap between the tip of the pencil and the stroke generated on the iPad 6 screen due to its non-laminated display but it won’t matter to most users like me. Internet joke: if you buy the iPad in space grey (like mine), you may not even notice the gap. The lack of an anti-reflective glass will make reading difficult on the iPad on a sunny day at the beach but as long as I am indoors, the Retina display on the iPad sixth generation is absolutely brilliant.

The all-new iPad Pro sure has a ton of exciting features like USB-C, smart connector (supports Apple Smart Keyboard), better display (laminated display, True Tone display, anti-reflective glass), quad speakers, Face ID, faster processor, more RAM, thinner bezels and all that but it costs a whopping 2.5 times more than the iPad. With the extra goodies like Apple Pencil 2, Smart Keyboard, the total cost would be close to ₹1 lakh. I didn’t want to invest that much into the iOS ecosystem already as my desktop / laptop will continue to run Windows (no Mac) in the foreseeable future and my phone is still an Android.

MCQ: One of the main reasons why I bought the iPad was to solve multiple choice questions on a bigger screen. The paid subscription apps like Pastest are a great resource for studying for exams like the MRCP. Reading the explanatory answers on the iPad is much easier than that on the cramped phone screen.

PDF: Most textbooks have their PDF available but reading them on the PC was always a cumbersome experience while the phone screen was too cramped for comfort. The 9.7 inch display offers a pleasant reading experience and I use the Apple Pencil to annotate PDF books while reading them on the iPad. The best free app suited to the purpose is PDF Viewer. As you can see in the picture below, I can underline, highlight and note down my own words while reading a PDF. 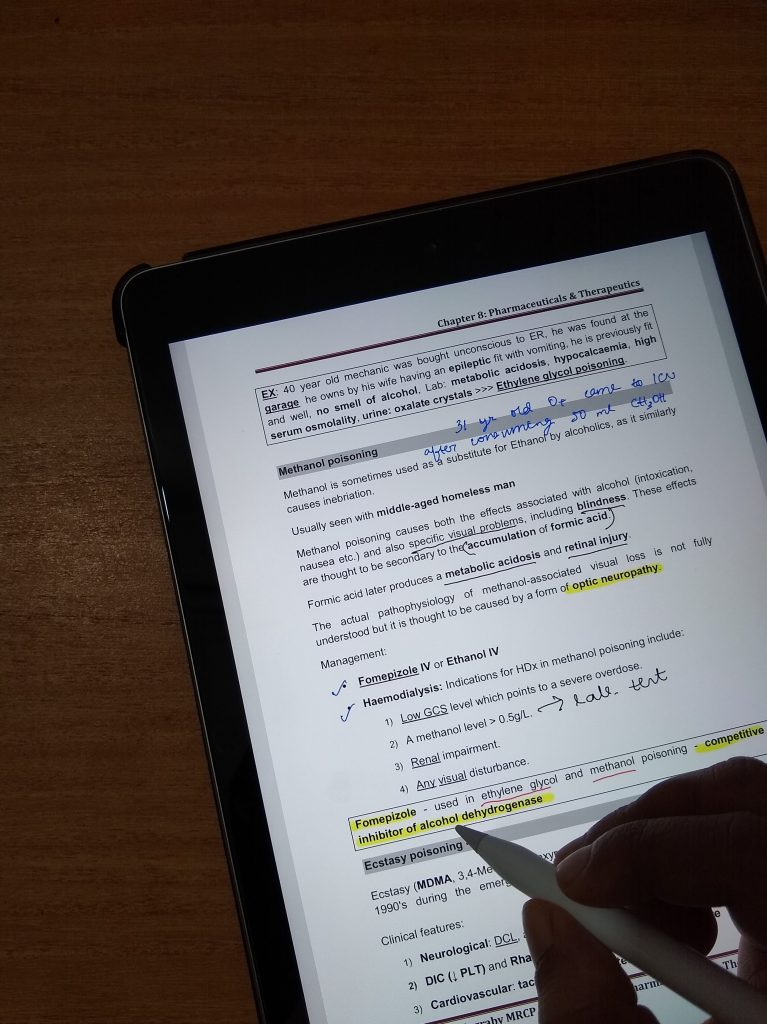 The paperless desk! Late night reading at home on the iPad with the Pencil.[/caption]

Image Annotation: For annotating images (mostly screenshots) I use the in-built iOS tool called Markup that comes adequately feature-packed for my needs.

Medical Apps: The App Store has a rich collection of medical apps e.g. MDCalc, an indispensable tool in the hospital. Discussing each of the medical apps I use is beyond the scope of this article. I plan to review them soon separately.

Notes: Despite existing for more than ten years, Evernote still feels like an incomplete product which led me to try a lot of other apps like Bear Notes, but I have remained stuck to Evernote for general note taking because it is cross-platform and has an excellent web clipper tool. I finally got tired of Evernote, which hasn’t evolved enough with time and looks dated, and moved to Bear notes. I am also using Day One for journal writing. Most of my ideas, memos, snippets of useful information, web pages go to Bear while I will write a travelogue in Day One.

Photo storage & editing: Photos look gorgeous on the Retina display screen. The stock Photos app has slightly better editing options but I use Google Photos as all my photos are stored on Google.

Drawing: For the artists, there are a good many apps like Paper, Procreate, which take advantage of the unique features of the Apple Pencil like pressure sensitivity. Of the two, Paper is free to download with some features reserved for paid users whereas Procreate is a fully paid app. 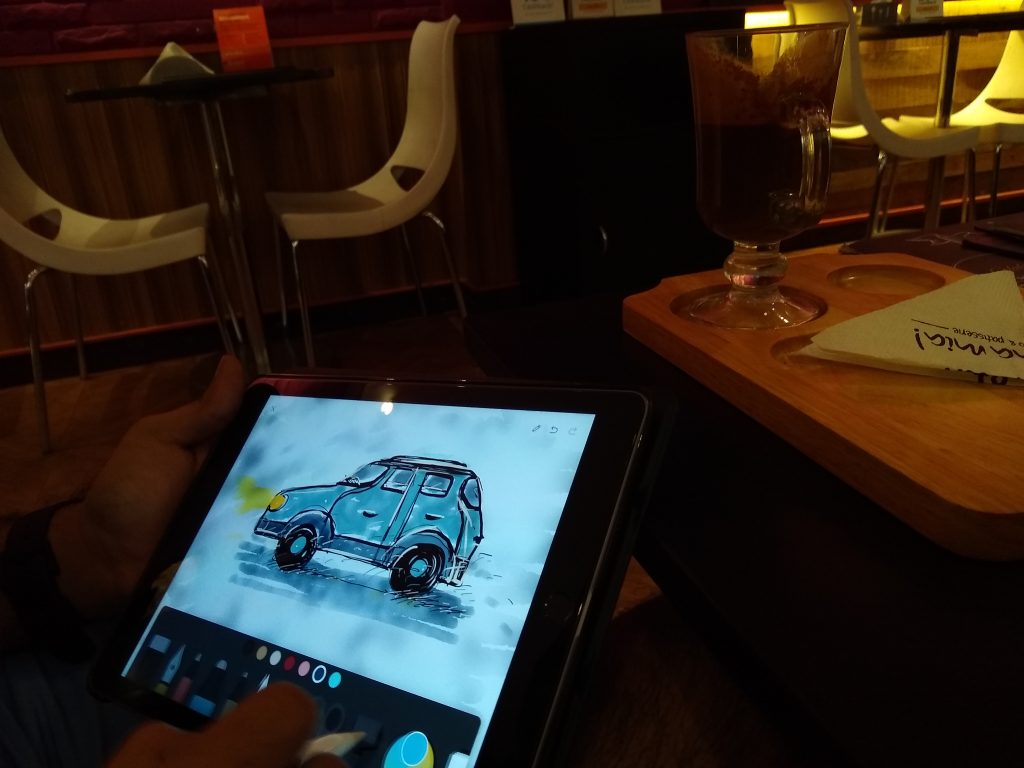 My friend Dr. Chandradeep borrowed my iPad to capture a cold damp morning in the rainy winter of Kolkata. Follow me on Instagram to see the finished painting.[/caption]

Read it Later: I have installed Pocket on my iPad, as it is also my favourite read-it-later app on Windows and Android.

Handwriting: I have purchased the app Goodnotes to write down some lines with the Apple Pencil. 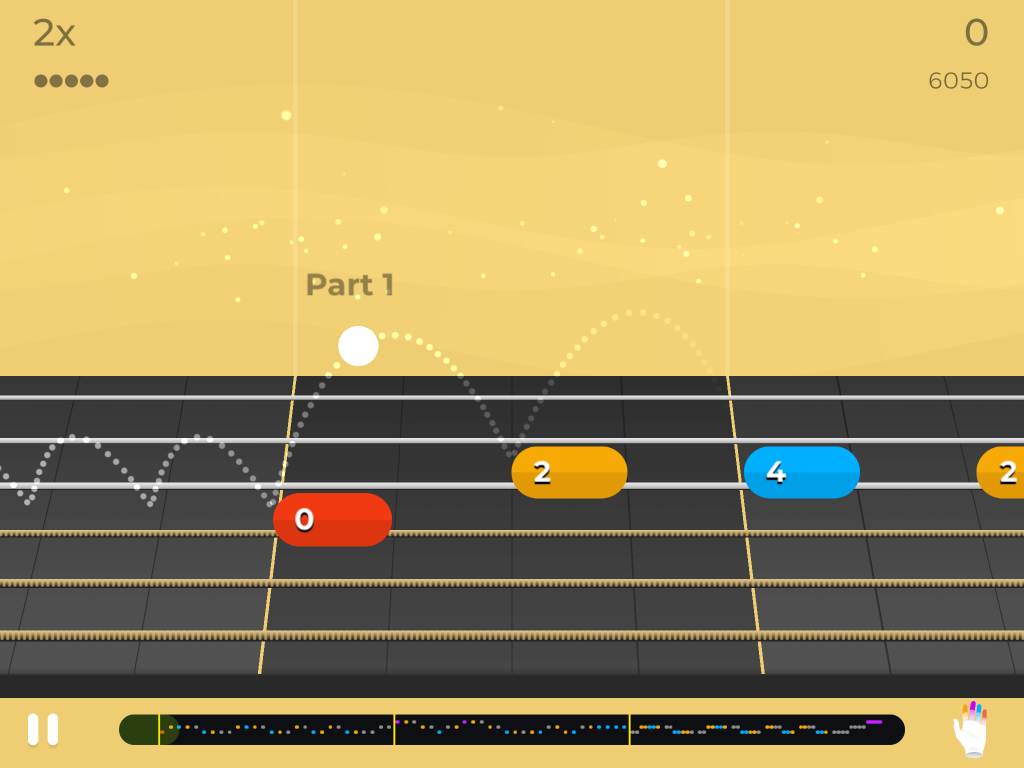 Video Editing: I have looked no further than the robust and user friendly stock app iMovies. For advanced users, there is always Luma Fusion.

File Manager: The stock Files app has my iPad sorted.

Others: The latest version of iOS allows you to uninstall stock apps. I was quick to uninstall the Mail app and install Gmail. Similarly, I installed Google Maps, Google Drive, Google News (Apple News isn’t available in India), Google Chrome, although iOS doesn’t let you uninstall Safari, and AccuWeather. 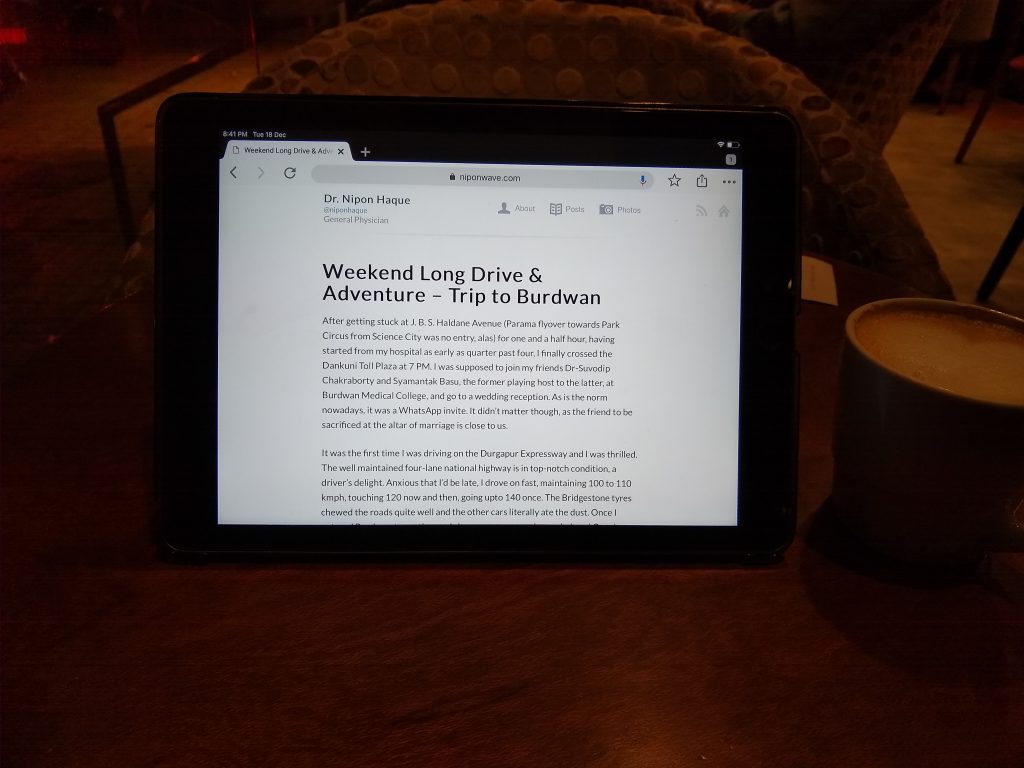 Keyboard: I considered buying the popular Logitech Slim Folio keyboard case as the iPad 6 doesn’t support the Smart Keyboard Folio, Apple’s own product that elevates the iPad Pro to another dimension, but cancelled the idea when I read that the Logitech Slim Folio is not as slim as the branding may suggest. I decided to get the Logitech K380 bluetooth keyboard, once I figured that I would require a physical keyboard for the iPad not on most days but only on those rare occasions, like writing this blog post on a whim, for which a separate keyboard would make more sense. A small form factor, a sleek design and a textured matte finish make the K380 a suitable iPad keyboard. The springy keys provide a very satisfying typing experience and the build quality feels solid. The keyboard specific iOS shortcuts (a list of which can be accessed from any screen by long-pressing cmd key) are a major boost to productivity but I like Logitech’s own shortcut for capturing screenshots (fn + tab) the most. I got this keyboard from iBhejo.com for ₹951 during their Christmas clearance sale. 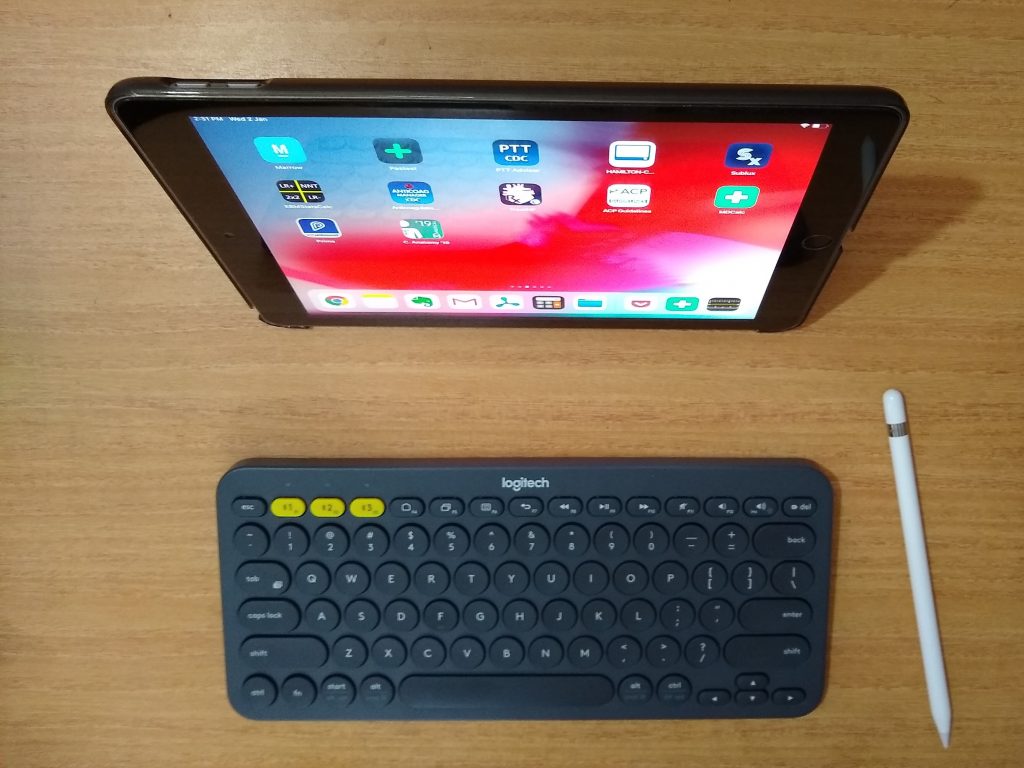 Case: The original Apple Smart Cover is not sold at Apple Stores in India and I was offered an ordinary case at the iStore. I wanted something better and decided to buy the Moko iPad case, an imported product from US, for which I ended up paying nearly three times the actual price of $12. However, I am not complaining as it is still cheaper than the case I was offered at the store. The Moko case is a snug fit on the iPad, with cutouts in the right places for the ports. The lid closes fully, leaving no gap, and tightly, thanks to the magnetic action. The auto wake / sleep function is flawless. It doesn’t add much bulk and the iPad still feels good to hold. Despite being lightweight, the case feels sturdy and durable, one that is built to last. The cover provides a strong footing to the iPad when used as a stand and offers two view angles.

Tempered glass: Although I don’t install tempered glass on my phones, I decided to put one on my new iPad as I didn’t want scratches on the screen. As none of the products available in India seemed good enough to me, I zeroed in on the amFilm screen protector, an US product priced at $10. The installation was actually fun: it was thrilling to watch the screen protector adhere itself as the point of contact spread across the iPad screen surface on its own! I am highly impressed by the quality of the tempered glass. The stunning display of the iPad is not compromised and the Apple Pencil glides smoothly as ever. The screen protector is hardly discernible, it is almost not there! It feels like glass, without any plasticky feel, and isn’t a fingerprint magnet. For those who want a better writing or drawing experience on their iPad, they can go for the much acclaimed PaperLike which comes with a matte finish, reducing the screen clarity only slightly but offering just the right amount of friction between the Pencil and the iPad, as well as providing some much needed anti-reflection to the iPad 6 and shipping free of cost to India. 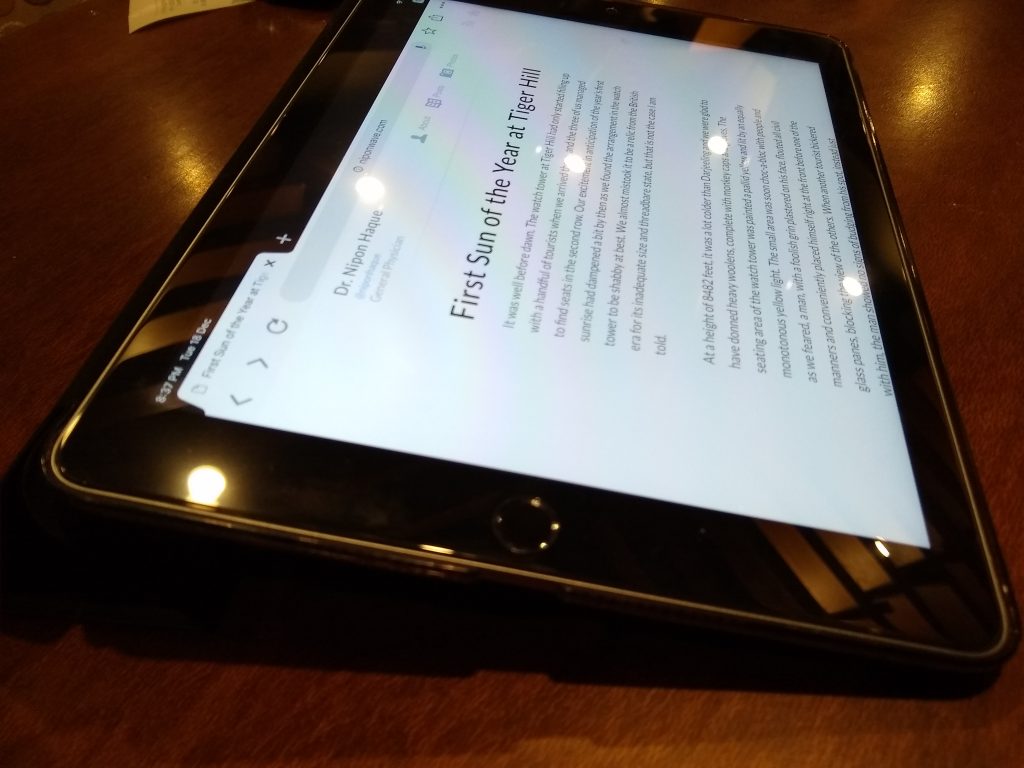 Hardly there! The amFilm screen protector is nearly invisible on the iPad 2018.[/caption]